Last Monday was certainly not marvelous for Boston. And just a few days prior to the marathon bombings, my friend Colin and I made travel plans to go to Boston this past Saturday 4/20 to visit our best friend Greg to celebrate Colin’s 24th birthday. On Friday, the manhunt for the bomber had us wondering whether or not our trip was still on. Of course I am glad he was apprehended first and foremost because we can finally get some answers which will hopefully give this tragedy some closure. But I’d be lying if I said I wasn’t also happy he’d been caught because the travel ban was lifted and our Boston visit was back on. The visit ended up being pretty marvelous!

Thanks for keeping Monday positive, Katie!

Marvelous is…learning a new and hilarious game – Cards Against Humanity. Think of a crass Apples to Apples (the tagline is “a free party game for horrible people”). Examples of black “category cards” include “Lifetime movie _______, the story of _________” and “Instead of coal, Santa now leaves naughty children _____.”  The cards used to answer are called white cards and include phrases like “black people”, “Nickelback”, “the miracle of childbirth”, and…well, you get the picture. Hilarity ensued. Marvelous is…finding a $1.99 nip (during my pre-trip packy run) of Van Gogh PB&J Vodka, which I previously mentioned I wanted to try. Verdict? Kinda smells like those Smuckers Uncrustables, and tastes like only the jelly part of a PB&J. A bit of a bummer! I could always pair it with PB, as Stephanie suggested to me on Instagram, but that could result in ruining PB for me forever and that’s a risk I can’t take. At least I got to try it!

My other packy nip purchases (the PB&J vodka is on the right – love Van Gogh‘s bottle art) which will be used another time.

Marvelous is…meeting and spending a night out with Annie of Avocado Athlete! I found her blog a few months ago and a couple days later, Greg mentioned to me that his fellow BU Law classmate Annie had just started a blog. I looked it up and there she was – Avocado Athlete, AND Greg’s friend, one in the same! Such a funny coincidence. She was a sweetheart! 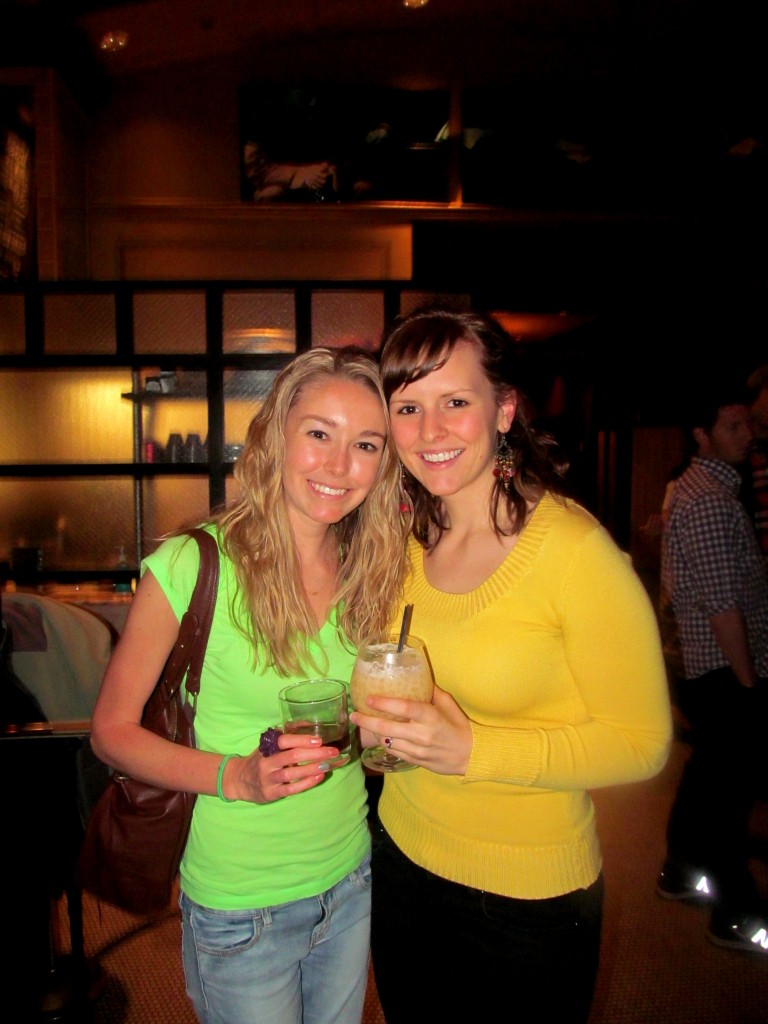 We even rocked some Plant Power colors – I told her I was the lime, she was the lemon!

Marvelous is…the cocktails at Eastern Standard. I’ve had brunch there once a while back but had my heart set on visiting during our night out for some creative libations. My selection, the Houndstooth (vermouth, bitters), did NOT disappoint. 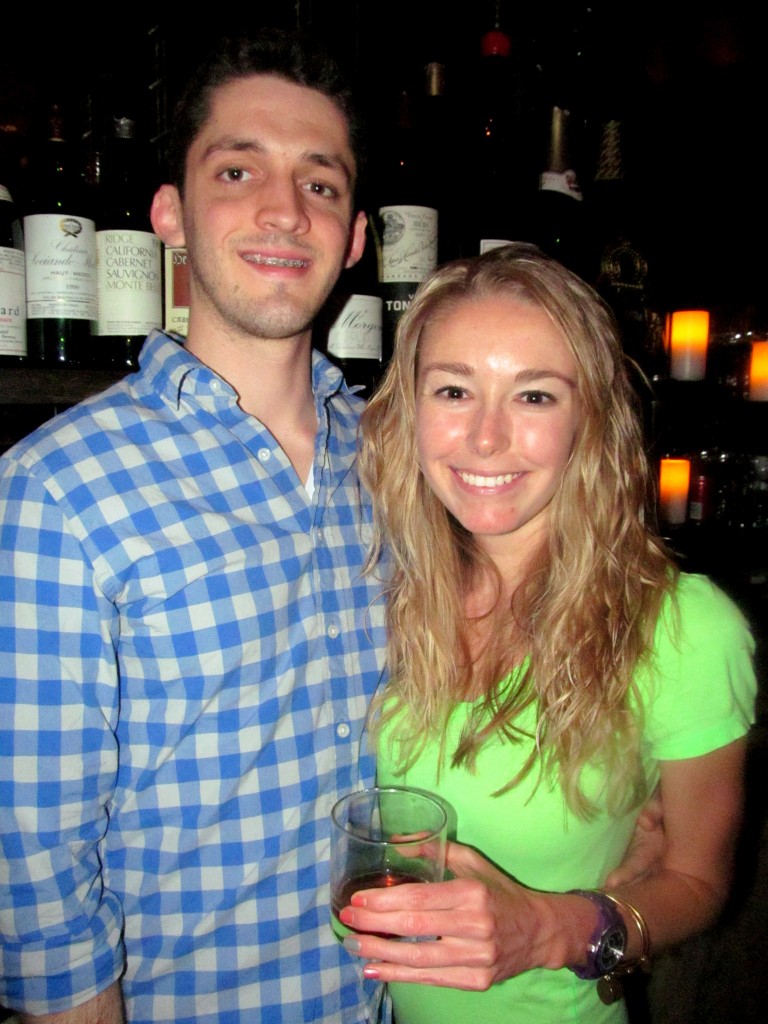 Thanks to Greg I also got to try some of their bread pudding. Ho-ly-crap! So good.

Marvelous is…sitting next to my good friend Kelly during a slower-than-slowly served meal at Scoozi. I wanted to visit because I’d heard good things from Tina’s blog, but the Cambridge location’s service was terrible (though the food tasted fab). It didn’t matter much since I hadn’t seen Kelly since the fall and we were able to reunite over drinks, per our usual routine. 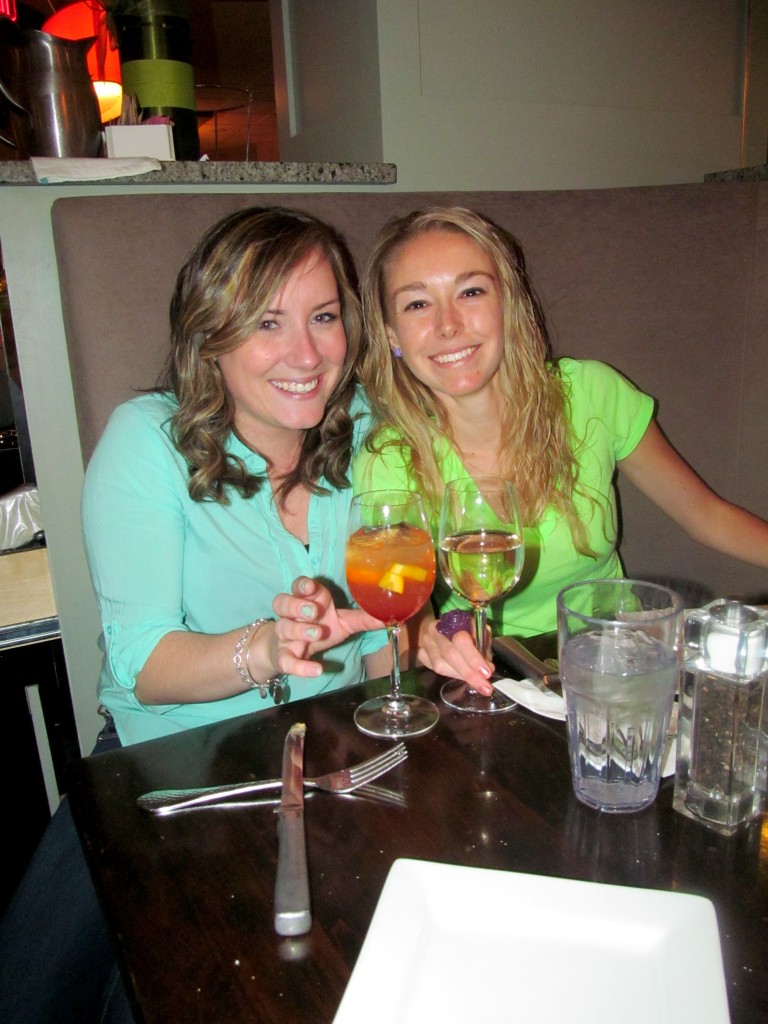 Pomegranate sangria for her, Seaglass Sauv Blanc for me! 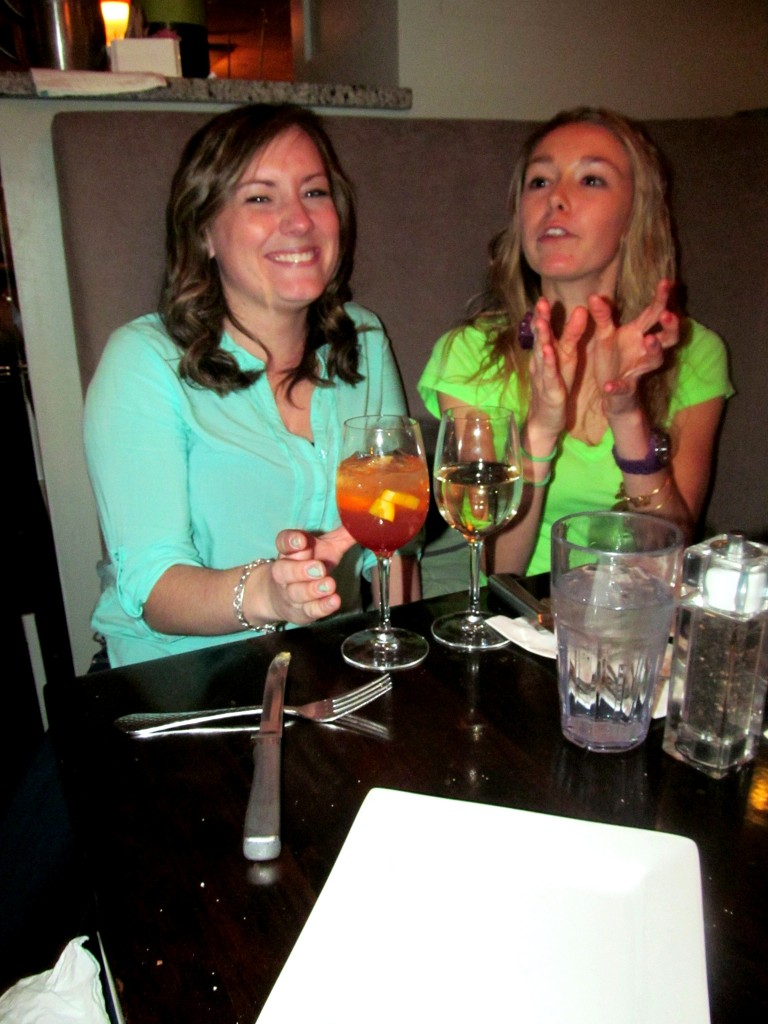 We had to get some practice in for pics.

Marvelous is…my good high school friend Kristen meeting us out, along with her boyfriend Greg! So wonderful to spend time with her and to see him again as well! 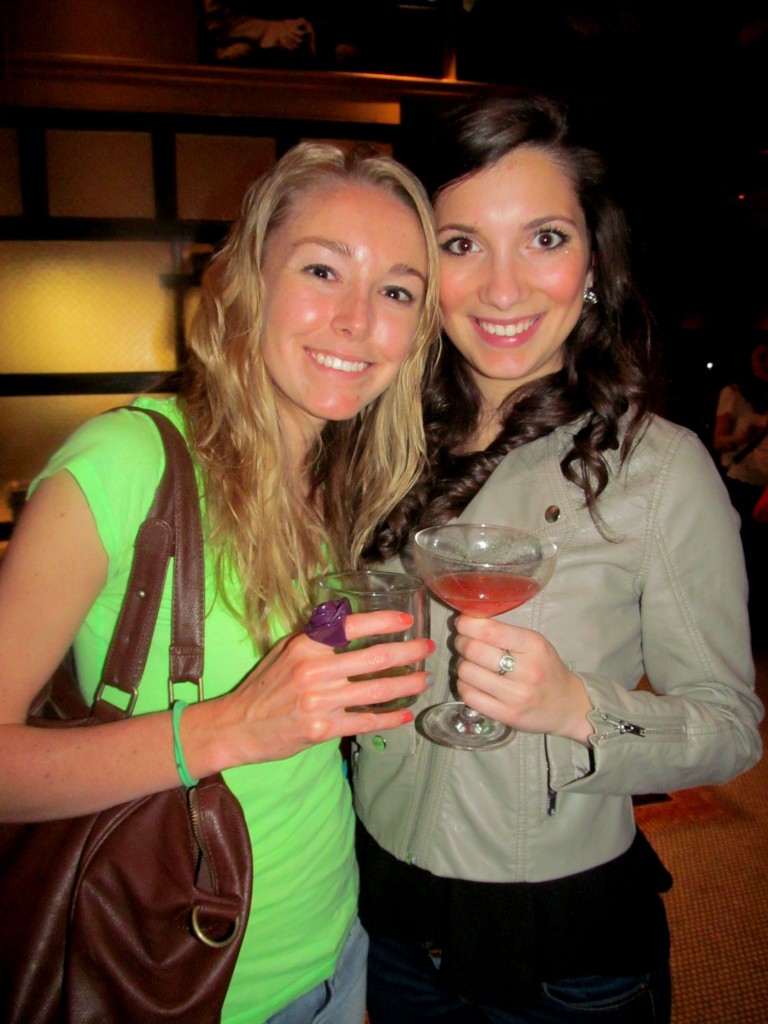 I selected a winning drink for her at Eastern Standard – the Corio Coupe (Reyka Vodka, champagne, apricot, orange oil).

Marvelous is…passing on partaking in a round of tequila at Cornwall’s Pub, but still being there to celebrate Colin’s birthday with him, AND not feeling like death the next morning due to said passing on the tequila! 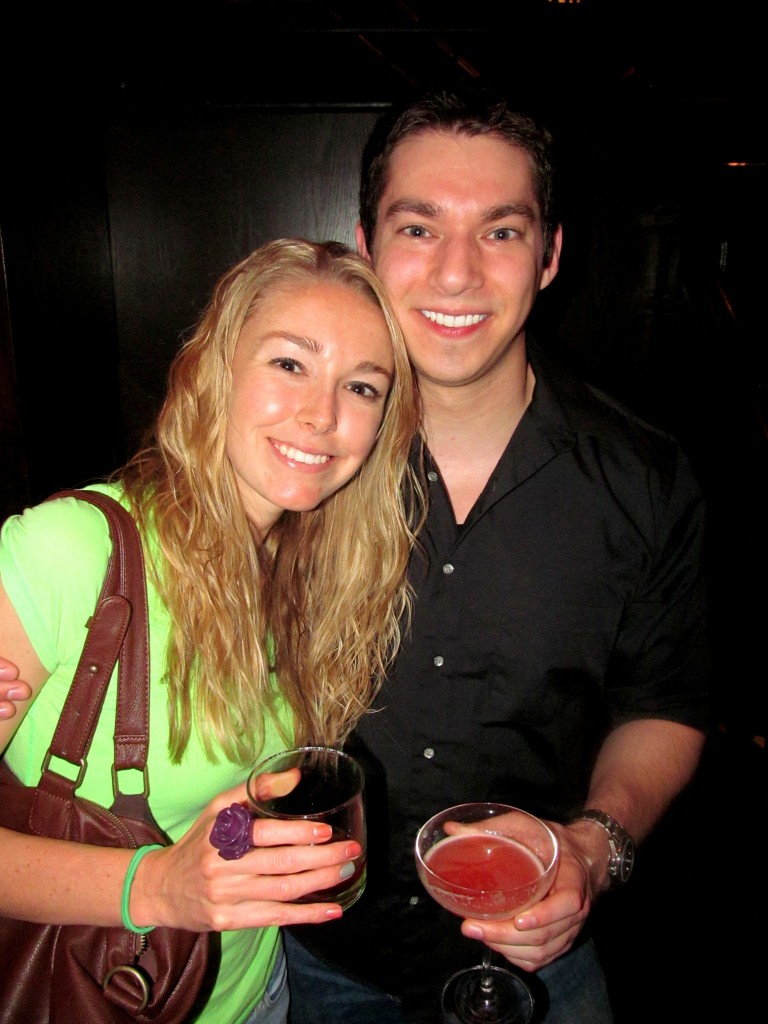 Colin may kill me for posting the pic of him drinking the girly drink I bought him at Eastern Standard. Happy birthday? 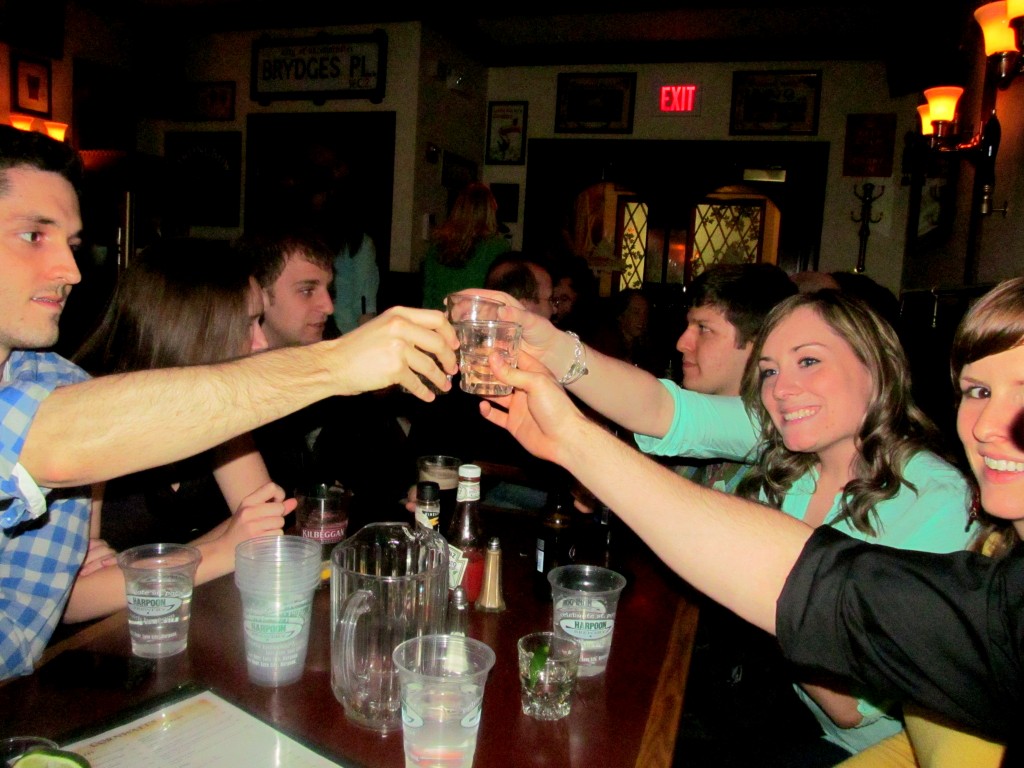 Greg also was unsure about partaking, but Kelly looks proud?

Marvelous is…taking a nice walk to Blue State Coffee the next morning for my beloved caffeine. I even had some time to hang there for a bit and plan out my homework for the week/edit pictures. Plus, I listened to NPR on the way there and enjoyed some killer views.

The food options were super impressive – plenty of egg whites with veggies and a PB/banana panini!

Marvelous is…fighting my ego by ordering something a la carte during our Sunday lunch at an all-you-can-eat sushi place called Yamato, though in my mind I didn’t feel “hungry enough”. I ended up finishing and enjoying my edamame and sashimi salad, though I’d be lying if I said the fact that I finished what I ordered didn’t produce some anxiety in me. Thank goodness my efforts to focus on both the old and new friends present and in the moment with me were helpful in dealing with that anxiety.

Can’t lie, it was all delish. And such a freaking generous sashimi portion for $7.95! 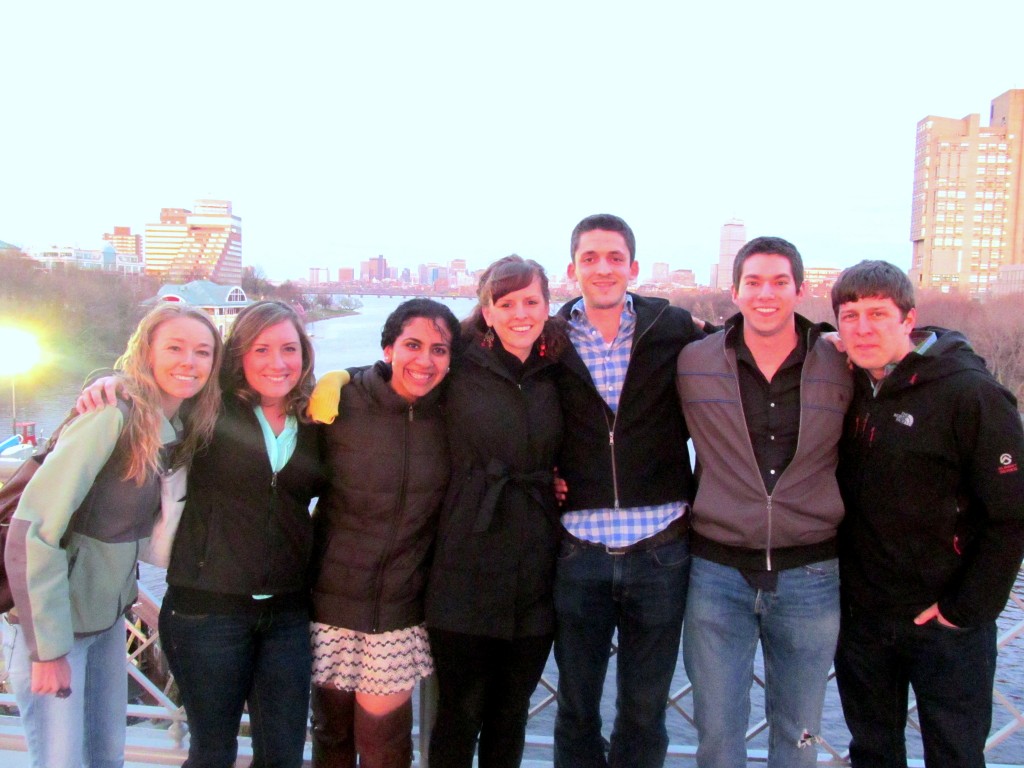 But friends trump even seafood 😉

Marvelous is…getting back from Boston and doing a quick 20 minutes of StepMill speed intervals followed by a #plankaday PR!!! Annie and I were discussing Saturday afternoon that we both were currently at 4:30 minute forearm planks and trying to hit 5 minutes, so after a fast gym trip upon my return from Boston on Sunday I took my planking to the grass and hit my 5 minute goal outdoors while enjoying the beautiful day!

But most marvelous is…this sunset, and everything else beautiful about the city of Boston. It almost didn’t feel like the bombings or the manhunt had happened – the city and its people are very resilient. Thanks to the clear weather, and the fact that residents probably had cabin fever after Friday, everyone was out and about running/walking during the day and celebrating at night. You can’t keep Boston down!

What was the most marvelous part of your weekend?

Have you ever been to Boston?