The second portion of my epic weekend began Saturday morning; I woke up in Kat‘s guest bedroom (I stayed over after Friday night’s concert since she lives in that area), got decked out, and hit the road with her, her husband Mike, and baby Penelope. Our destination? The race track in Saratoga…my first time there! 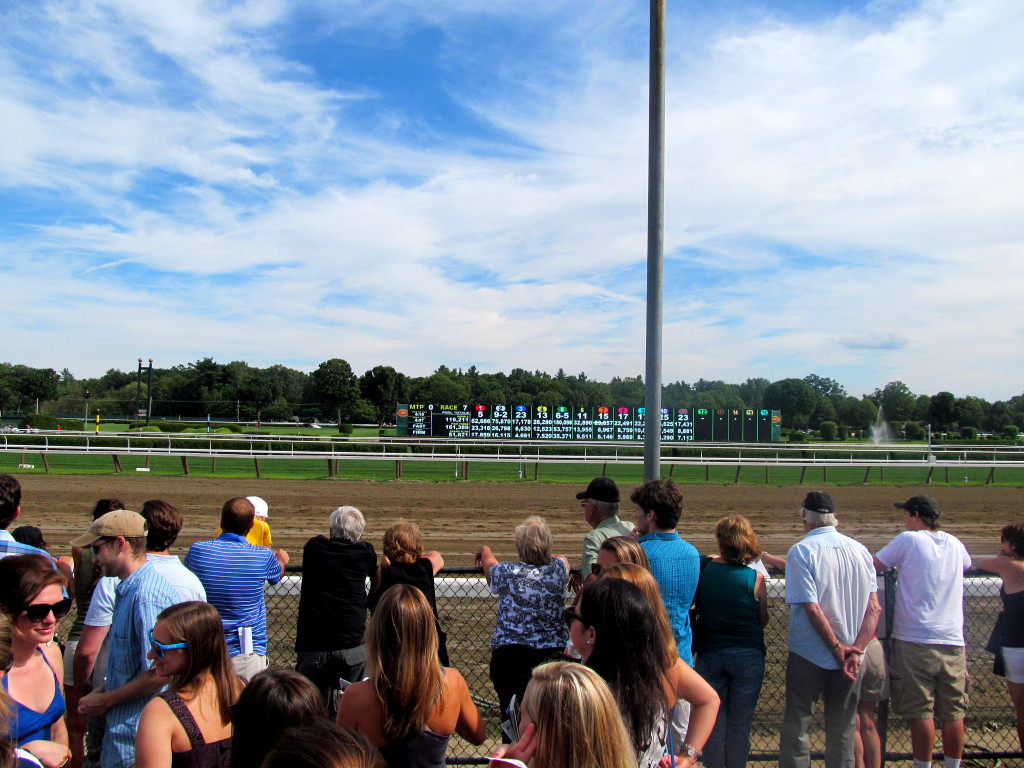 Kat, Penelope, and I donned our preppiest dresses! Kat and Penelope both wore Lilly Pulitzer, because mommy and daughter simply MUST match. I wore my nicest dress, by Vineyard Vines…the one I tricked my dad into buying me since it’s Tennessee Vol orange and white 😛 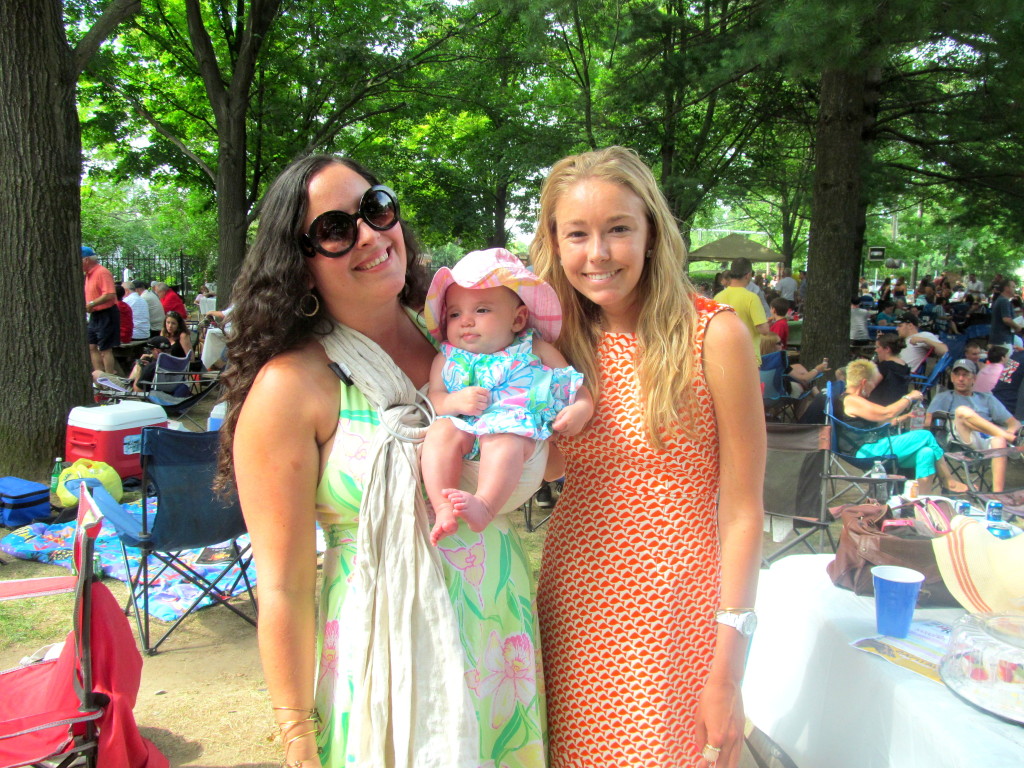 And this time, Penelope did not poop on her Lilly ensemble!

I also obviously wore a floppy hat, but I’m pretty sure I kept it on about 10% of the day, because it was too floppy…as in I could not see! 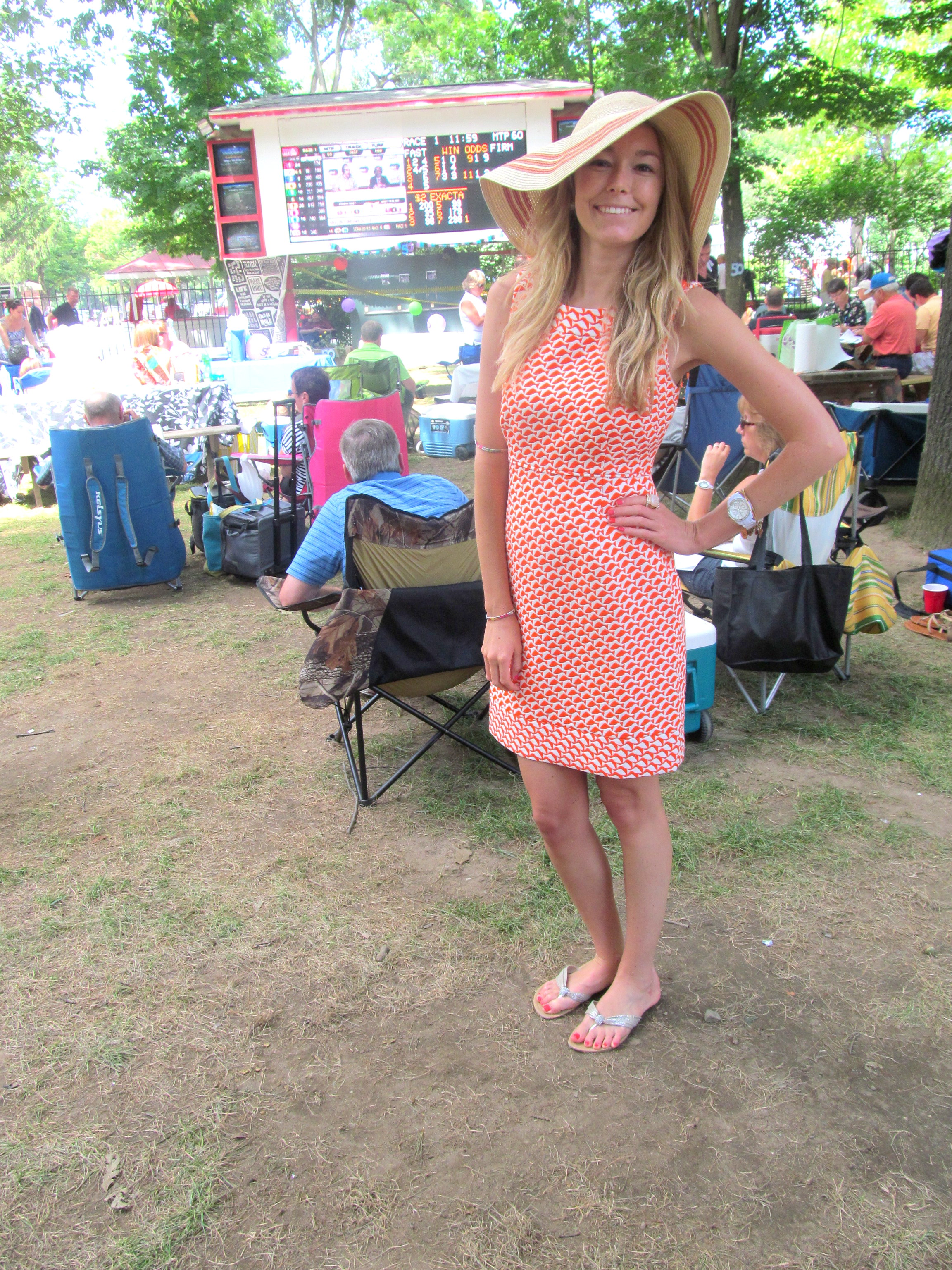 Thanks to my sis Hannah for letting me borrow your hat!

Saratoga ended up being way cheaper of an endeavor than I was expecting. The race track allows all food and drinks to be brought in (but plenty of both are also sold) so long as nothing is in glass containers. Alas, my pear and eldeflower infused champagne came in a glass bottle, but Kat and I came up with a crafty solution. On our way to the race track she’d been drinking Dunkin Donuts iced tea, so we poured it out of its plastic cup and re-filled it with…the champagne! 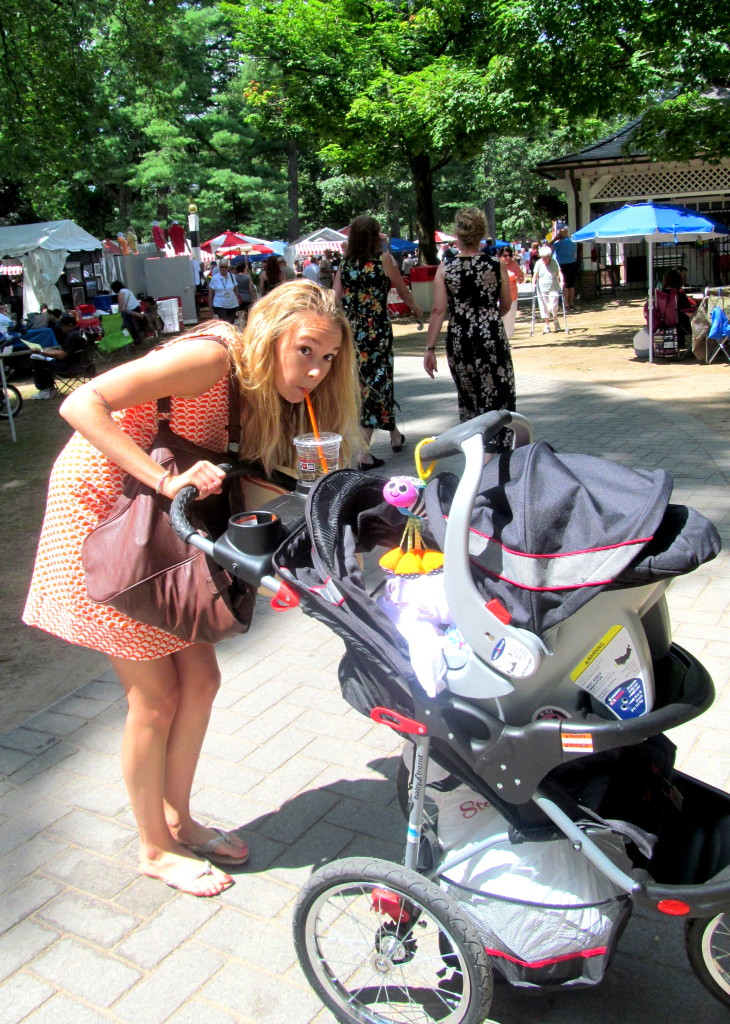 Which could be sipped with a straw while pushing the stroller – winning.

However not ALL the champagne would fit in the DD cup, so we poured the rest out. JUST KIDDING, WHY WOULD WE EVER DO THAT.

Thankfully Kat has hardcore in-laws who woke up at 5:30am and staked out two prime picnic tables for our group inside the race track grounds. They provided quite a spread of food! I felt a bit overwhelmed at first seeing all that food available to me, but I was distracted a lot of the day with betting, picture taking, walking around to explore the stadium, and watching a couple of races. I grazed all day which kinda made me feel like I was eating all day AKA eating a ton…which I know rationally I didn’t do because I never got full. I also tried to make smart decisions, like having my deli meats on a bed of greens (there was a FAB spinach salad with walnuts, apples, and balsamic) to balance out fun decisions, like having another of the previous evening’s fruit tarts and dipping a few Fritos in queso (come on, it was fabulous). 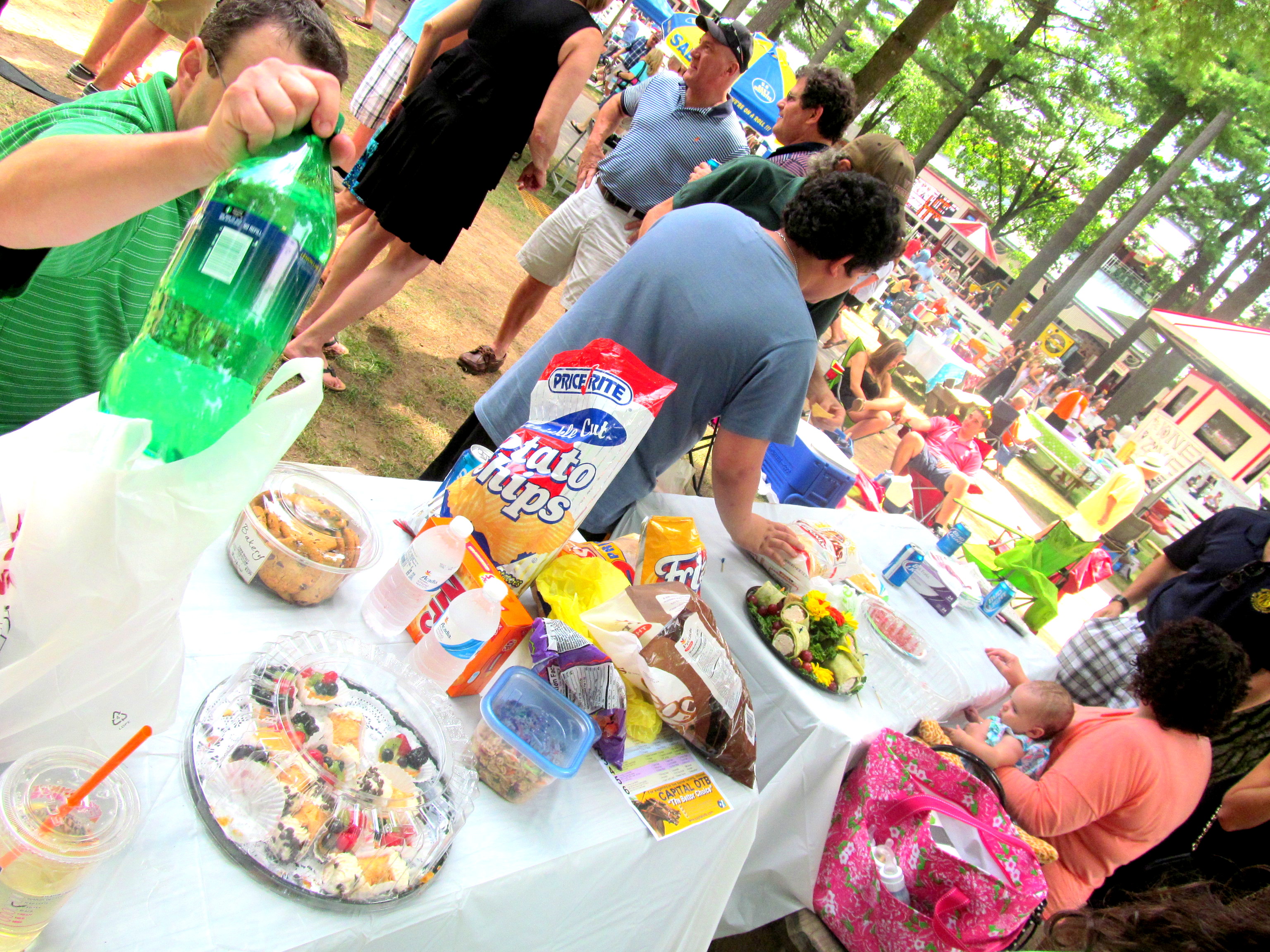 I also felt nervous about the day drinking that was going on. I worried drinking the champagne with a straw meant I was drinking too much, and despite how delicious and not-too-sweet Kat’s homemade grapefruit and rosemary sangria tasted, I still felt paranoid about the sugar I knew it contained. I tried strategies to calm my fears like making sure to drink plenty of water between drinks and leaving my cup behind at the table whenever I left to take a walk or watch a race. I think if I looked at what I drank throughout the day I’d see that it wasn’t “too much”, but the fact that I “grazed” on my drinks as well made it hard to keep track of exactly how much I was having and that made me nervous. 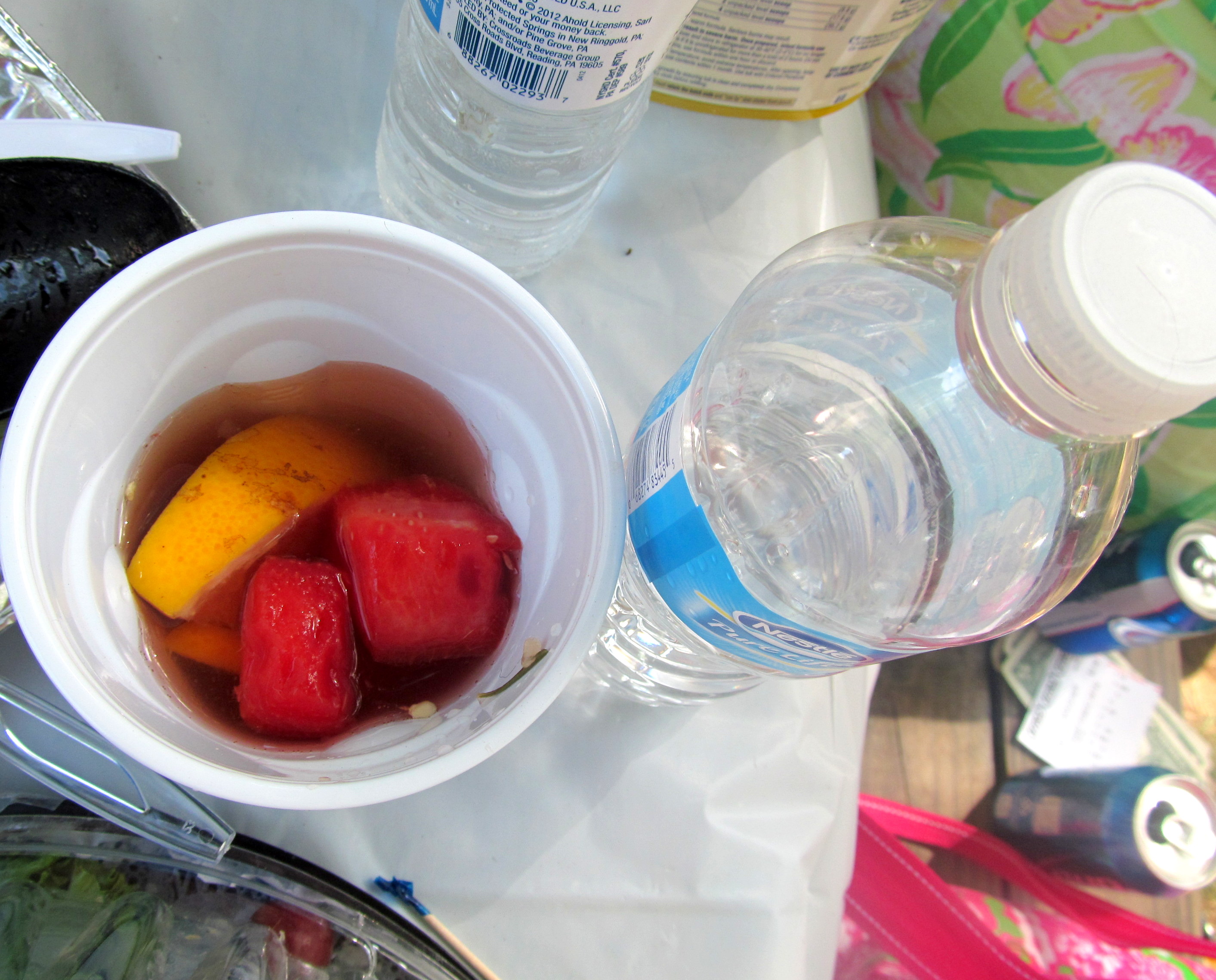 I definitely felt these anxieties throughout my big day but am proud that I did not let them stop me from enjoying myself and really savoring the time with my friends – and the chance to get to know Kat’s in-laws. What a wonderful family! They reminded me so much of my own – so warm and welcoming – and later that evening I even stayed up late with them (til almost midnight) chatting and laughing. 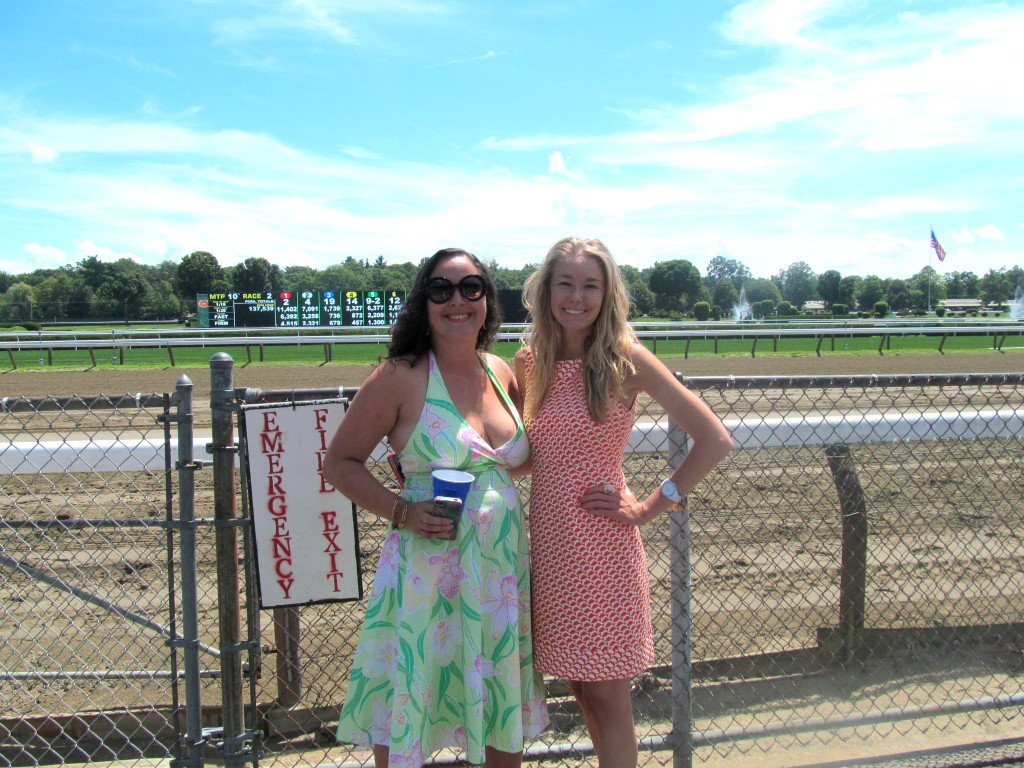 Is our prep hurting your eyes?

I did put about $4 down on some easy bets and ended up winning $4.90 for the day. So I finished up 90 cents, and will attribute it to the pat I gave Penelope’s head – for luck! 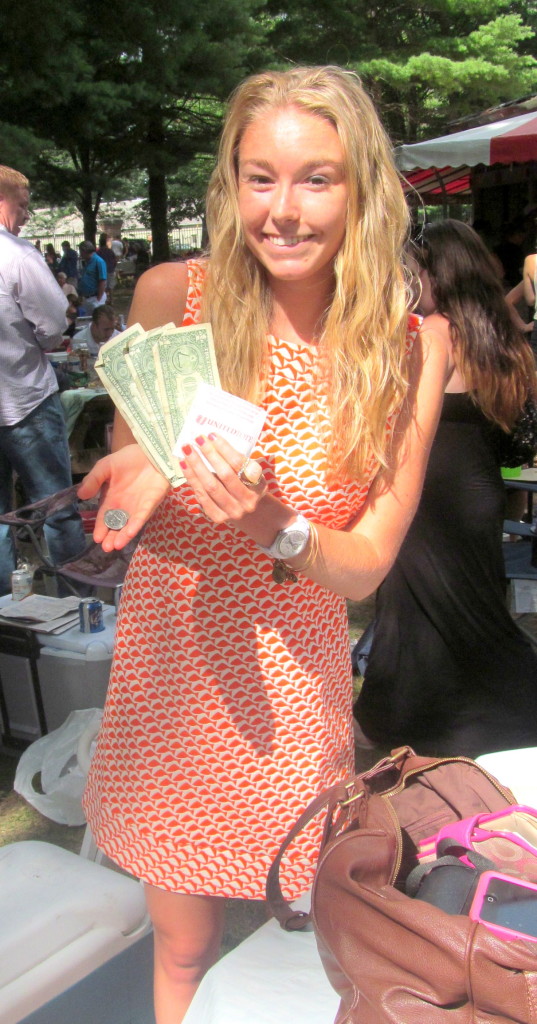 And I haven’t really talked about it, but I knew deep down leading up to this trip that Saturday at Saratoga would end up being a rest day for me. I wouldn’t feel like working out after the long day at the race track, nor would I want to be that weirdo who goes on a jog after day drinking. So Saturday became a rest day, and since I was busy all day and truly EXHAUSTED when we got home from the race, it was really much easier to do than the last rest day. But that’s two rest days in two weeks! And I think I handled this one better since I was so distracted.

Toward the end of the day we took Penelope out to the track to watch a race. I stood on a bench and held her so she could see “the horsies”, but I’m sure she had no clue what she was even seeing. Next year! 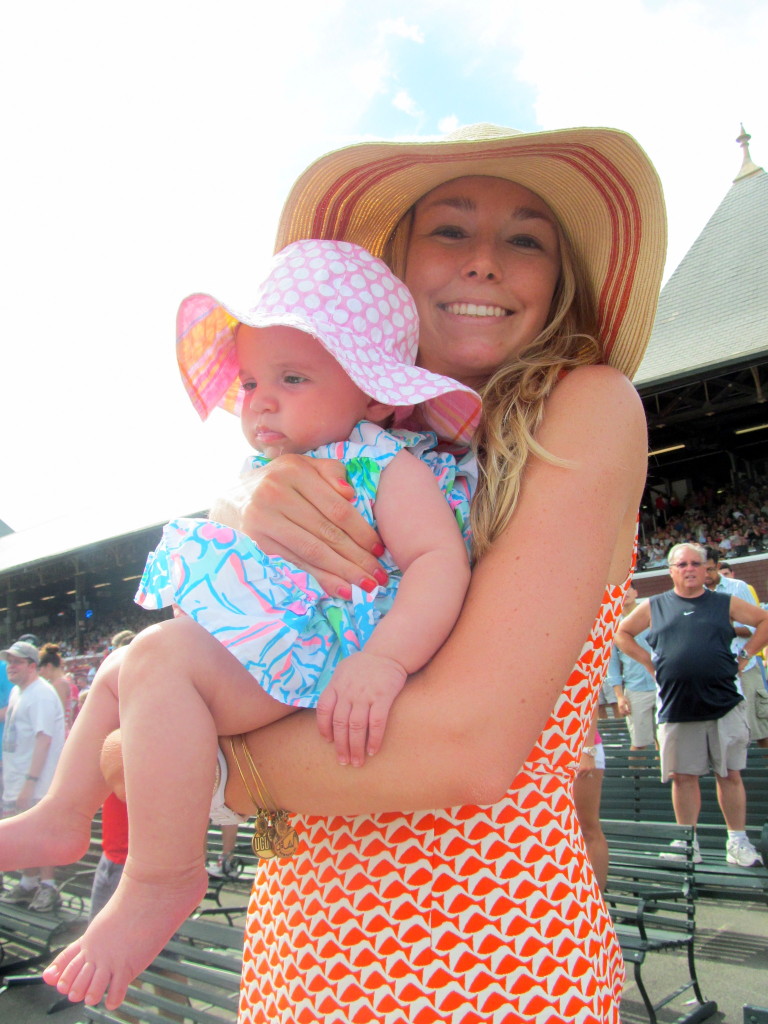 To end the afternoon, Kat and I shared a Cucumber Spa cocktail sold by the racetrack. It contained the new Smirnoff Lemon Sorbet vanilla vodka and SUPER crushed ice. It was almost like a lemon cucumber alcoholic slushie. Surprisingly delish and the price of $10 was not too steep at all for a stadium. 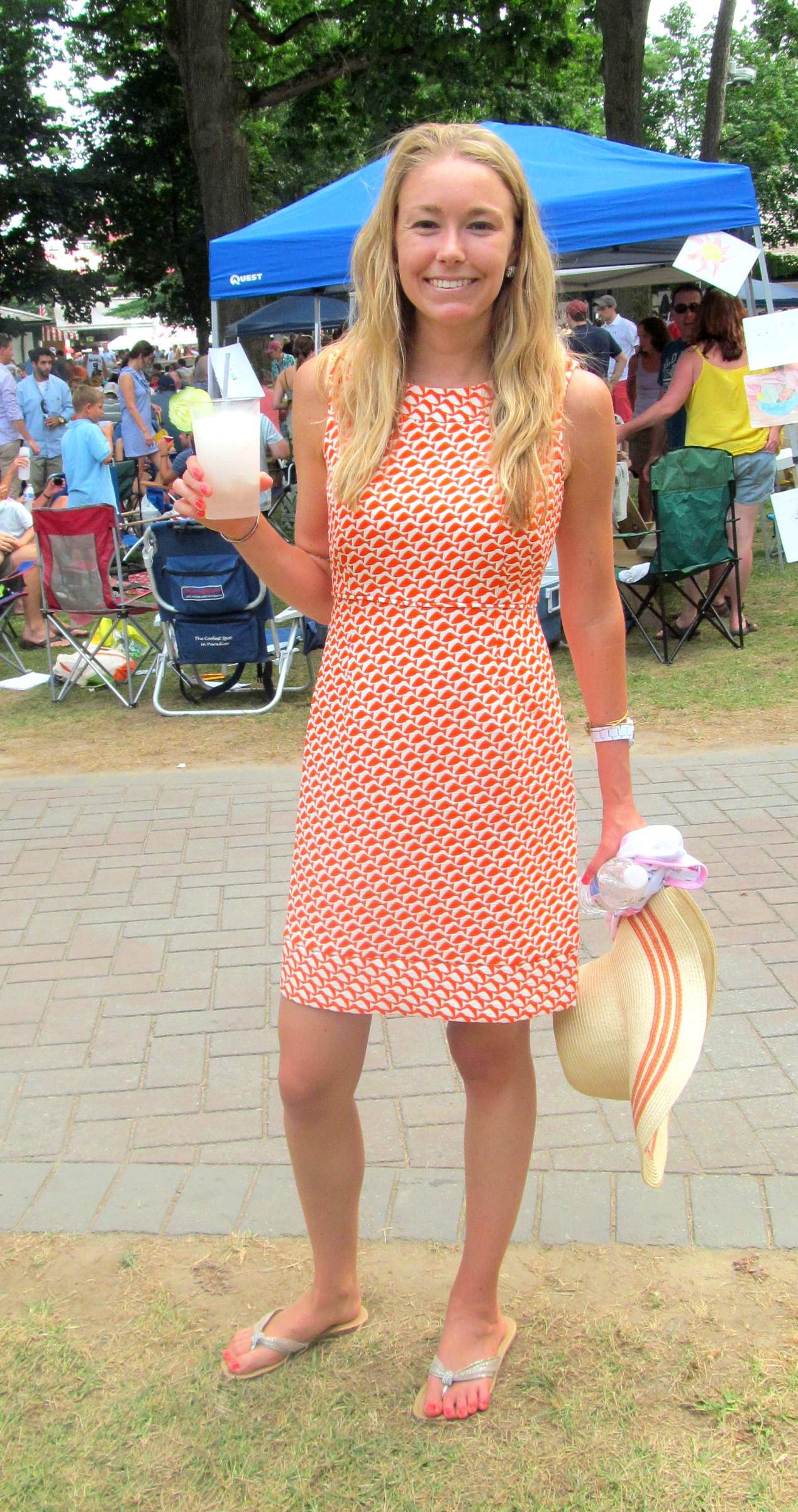 If we hadn’t had our own packed food to eat I would have spent a lot more money, but it would not have been on bad food. The Saratoga race track boasted plenty of options. Prices were kind of expensive (as to be expected) but foodies would have been satisfied! Wood-fired pizza, mac-n-cheese, and Moe’s food trucks were parked near the picnic areas. Kat found herself some beautiful raw Nantucket clams, and the lobster rolls coming out of the same stand were looking heavy on the lobster and very light on mayo. They even offered the lobster salad atop a salad instead of a roll!

Photo courtesy of Kat. How rad are her sunglasses?

I adored Saratoga and though I’m sure I won’t have time to go back this summer, I already am plotting a trip next year. I’d highly recommend it as a cheap way to take a mini-vacation. I’m also proud of the way I handled myself! Yes I experienced mental stress and ED-related guilt, but those are signs that I went outside my comfort zone and did what I wanted to do, not what ED wanted. So I’m scoring this 1 for Caitlin and my continuing quest to not let ED ruin my summer fun! 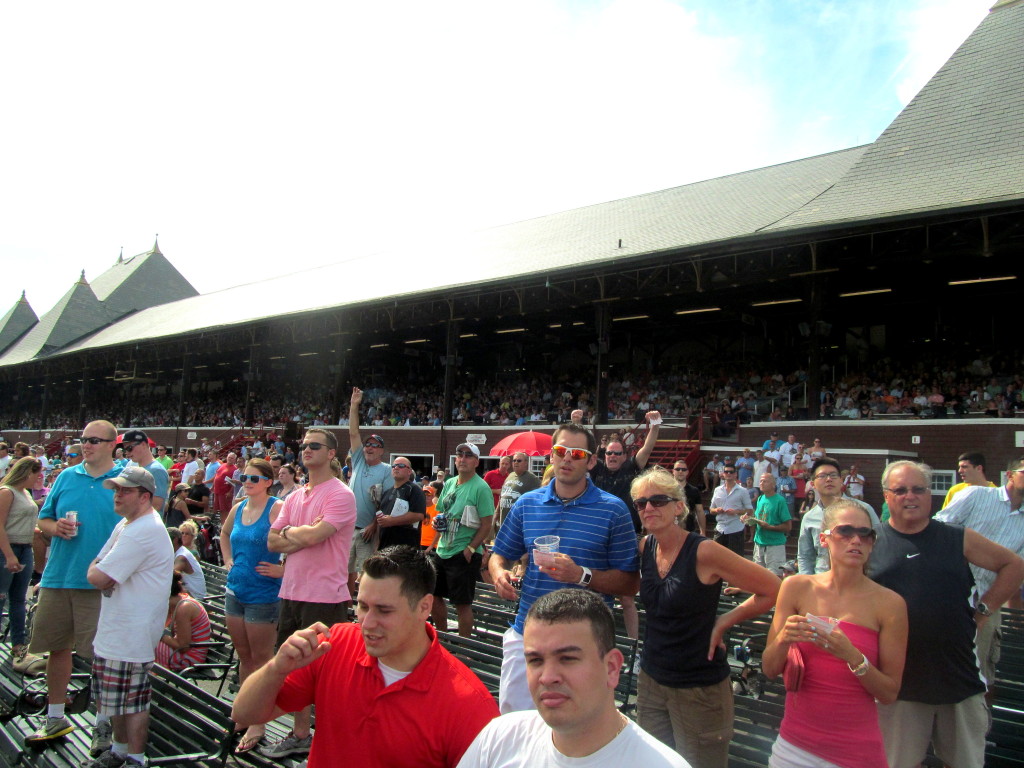 I will now end this post with another Penelope picture, because you cannot have too many.

Penelope smiles for the camera with Aunt Ginger!

Have you ever been to Saratoga, or any other horse race track?

Have you taken any weekend mini-trips this summer?

Do you ever experience anxiety related to get-togethers with large amounts of food/drinks?