Trade Em Up Tuesday: Slowing Down

Another longer-than-a-week gap between posts – ugh! I honestly had time this past Sunday night to blog, but opted to sit in bed and color (something I haven’t done in awhile) while listening to NPR instead. I’m getting ahead of myself though. Let’s get rolling with a Trade Em Up Tuesday that’ll tell you what’s been up with me in the last week-ish. 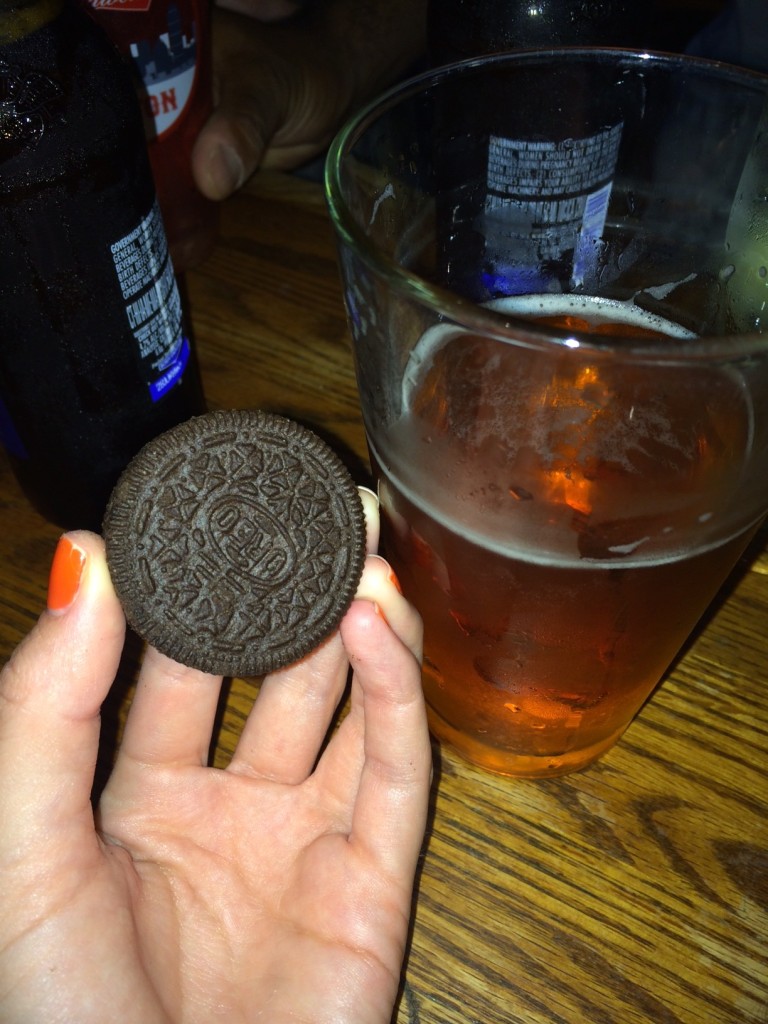 Oreos and beer were involved.

I would trade…FOMO. I’ve had a serious case of it lately and it’s resulted in me wearing myself out. I need to take a step back and slow down. Is there an event coming up? I feel like I have to go to make sure I don’t miss anything. Someone’s having  a party? Well I can’t possibly miss it, it’ll be so much fun! The thing is, a lot of the time it’s not even worth it, so I need to take a step back and put on the brakes. I was sick this past weekend and spent all day Saturday contemplating whether or not I should still go to my co-worker’s party. In reality it should have been a no-brainer – NO. Stay home and REST. 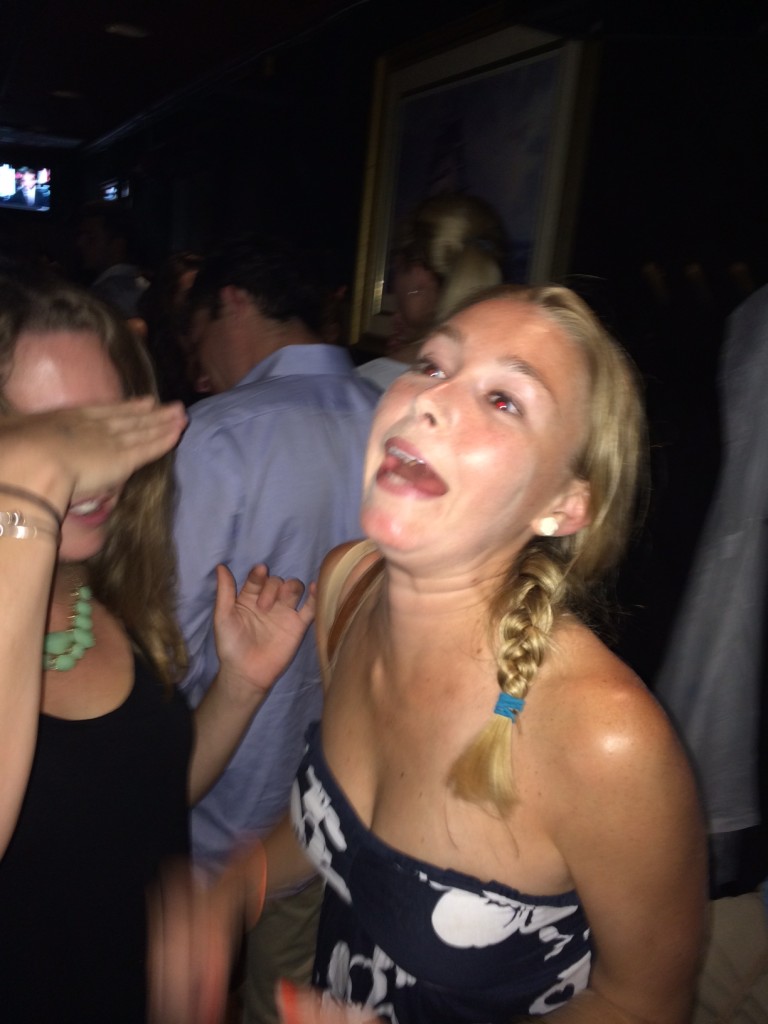 NO. That’s not resting.

That’s what I did and I’m so glad, but I wish I hadn’t wasted all that mental effort on the great debate. I should’ve woken up on Saturday morning, felt the way I felt, and used that to tell me that no, my body did not want to go to a party. It wanted to freaking sleep! I mean, it’s a good thing that I’m not using any little thing I can as an excuse to miss social engagements, because that’s what I used to do all the time out of fear of attending events that involved me eating or drinking more than what I was comfortable with. But I don’t want to take it to the other extreme that leaves me worn the heck out.

Nothing cures being worn out more than outside time on a towel.

I would not trade…some recipe success. Firstly I made PB Fingers BBQ Turkey Meatloaf, and it turned out great. I had some Monday and some Thursday. Next time I make it I’ll probably use more egg beaters, mustard, and BBQ sauce to make it more moist. But I added BBQ sauce after I made it and that helped a lot.

Secondly I decided to use up more of my egg beaters on Sunday night before they expired, so I whipped up some baked zucchini chips. So easy! I sliced the zucchini, coated it in egg beaters, then coated it in bread crumbs and roasted. I was pleasantly surprised by how not-limp they turned out and am glad to have them on hand for the coming week.

I would not trade…a fun Thursday night out with old and new friends. Jeannie introduced me to her friend Allie (who I’d met once before but don’t count since I was not in a state to meet people) and Allie introduced us both to her co-worker Courtney. The result? A fun girls night out at ALL the bars, including City Landing, which I already adore and still do thanks to another delish dinner. I felt pretty damn awful the next morning thanks to not getting enough sleep, and one (or two) too many drinks. But I had a great time and despite the temptation to feel like crap about myself all the next day, I tried to use the fun photos I found on my phone to remind myself of the memories I’d made.

I would trade…a summer head cold this past weekend. I didn’t get enough sleep Thursday night and woke up Friday feeling meh. I continued to feel more meh throughout the day, but also had un-cancel-able plans Friday night, so I got barely any sleep yet again. Safe to say that by Saturday afternoon, I felt like my head was in a stuffy cloud and that I could sleep for hours if I only had the time. A scheduled car service appointment and visit from the fam delayed that sleep, but I finally got about 12 hours of sleep on Saturday night and 10 hours Sunday night (thanks to NyQuil). Safe to say yesterday morning when I woke up I was feeling a lot better. Still iffy, but still a lot better. Colds just feel so WEIRD in the summertime!

So does eating soup, but it sure hit the spot. Amy’s Southwestern Roasted Veggie with added sweet potato cubes.

I would not trade…time with my family on Saturday night. My grandma came to CT from FL to visit, and my mom decided she’d bring her to Boston so she could see my workplace and my apartment. And so I could show her fabulous Boston restaurants!

Grannan, Mom, and I stumbled upon a free wine tasting at Brookline Liquor Mart, where my office is located!

I took them out for a drink at a spot I’d already showed my mom (and she’d loved it) – Regal Beagle. Then we went for dinner to Lineage, a restaurant down the street that I’d been to once and hadn’t been impressed by. But it’s from the same folks who brought me my beloved Eastern Standard, and my grandma said she was craving seafood, so I decided to give it another go. GOOD THING!

A black and white duo!

Not only did the three of us totally quench our seafood craving by sharing three seafood entrees – salmon, bluefish, and cod – but the restaurant is also doing half off EVERY bottle of wine in July! That meant my grandma got her own bottle of Chardonnay, because that was cheaper than two glasses, and my mom and I shared a delectable Oregon Pinot Noir. (No, my grandma did not finish that whole bottle!) 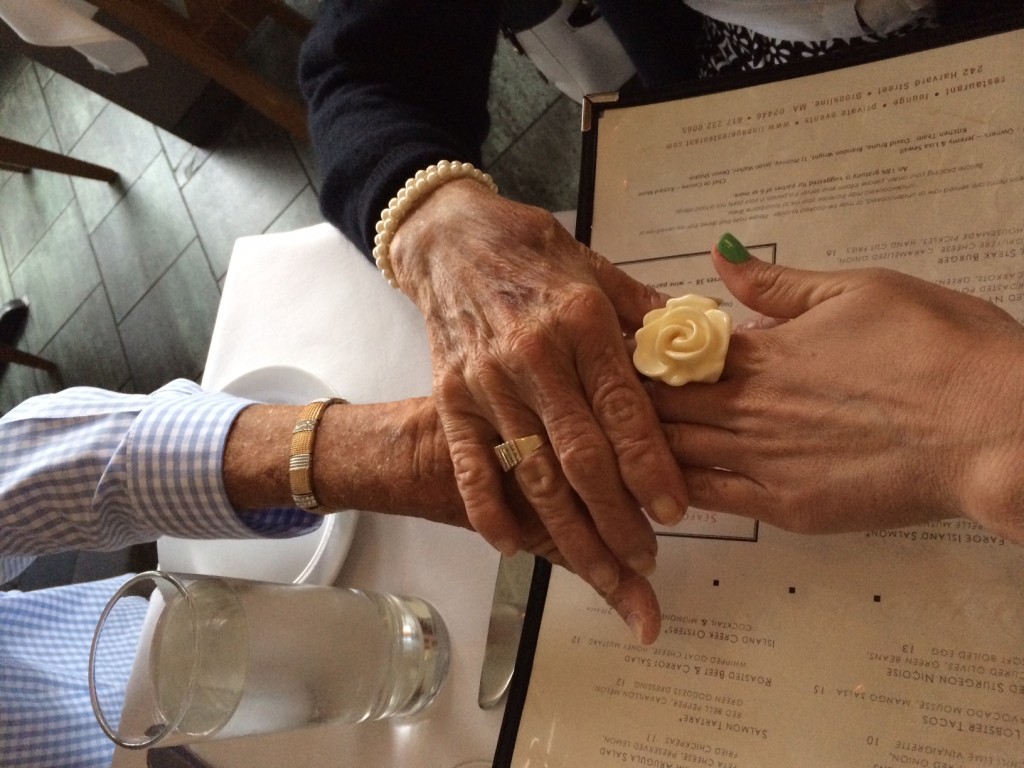 I called this moment “Team Seafood!”

Mom, Grannan, and I parted ways after dinner so we could all return to our respective beds and pass out. I missed them before they left the next morning since I slept til 11:15AM (!!!) but am so happy I got to see Grannan and show her my life in Boston. 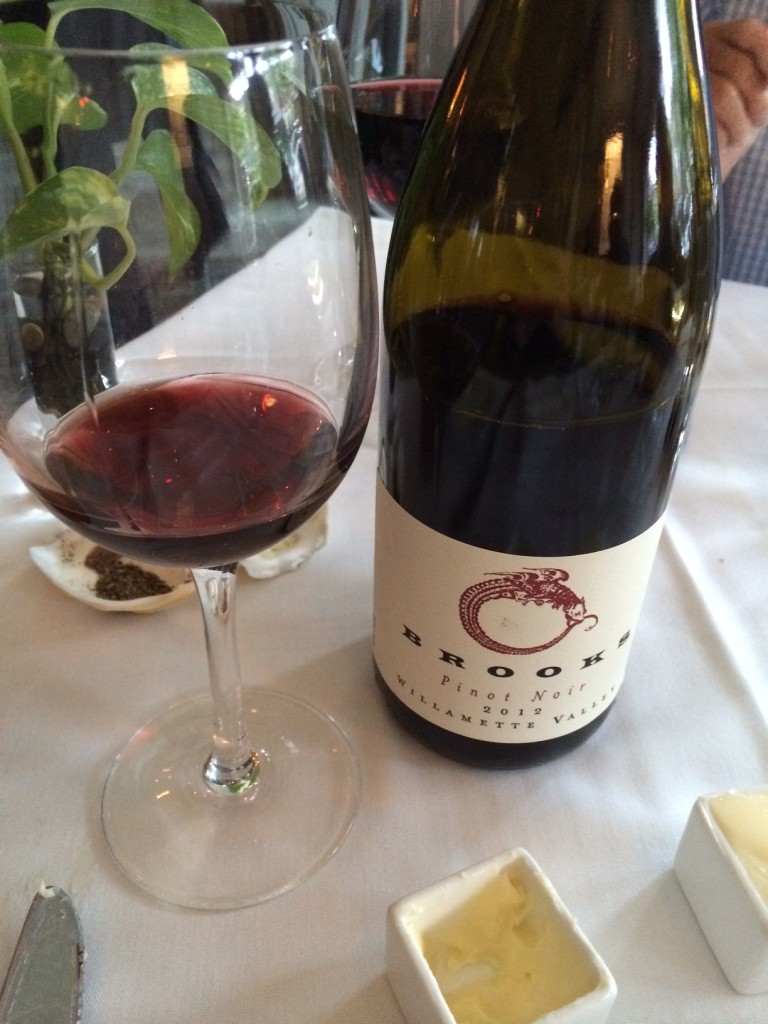 I would trade…less mileage this past week. I didn’t plan to do a long run this weekend (this is why I started my half marathon training early, folks) but I did plan to run at least 5 or 6 miles. Unfortunately that didn’t happen. Both Saturday and Sunday I felt crappy, so Saturday I went to spin to sweat it out and Sunday I pushed through 3.6 miles. That’s really all I had the energy for and though I know I should be resting even more than that while sick, I just have this fear that as soon as I start going back down in mileage I’m going to lose the endurance I’ve built up. And I don’t think I’m going to get in a long run this coming weekend since a certain special lady will be in town for her bachelorette party. So when’s it going to happen? Will it have to happen before work, which is my worst nightmare, seeing as I struggle to do more than 3 miles prior to 7AM? Lordy I can’t even imagine doing 5 miles before work, let alone 9 (my next long run)! And this week is so busy too. Deep breaths, Caitlin. I know that this half isn’t until the end of September so I still have plenty of time to get my mileage back up there. But between this past Friday’s rest day and less exercise in the last few days than I’d planned, I’m pretty concerned about it. I would not trade…getting a new laptop. I accidentally ordered it two inches too big (oops) but am too lazy to exchange it because I’m just so happy to have a new laptop. My last one was getting pretty slow, had a battery with zero life, and had been in my possession since 2009. I stuck with a Lenovo ThinkPad, but this is just a newer version. And it still fits in my backpack despite the bigger size, so oh well. The only annoying thing is redoing all my favorites, log-ins, losing my email filing system, etc. Disorganization, ugh. First world problems, I know.

The dot above the “i” lights up when the laptop is on, which I think is downright charming. Source

As good old Porky Pig would say, that’s all folks. I hope it’s not another week-and-a-day til you hear from me again!

Do you worry about losing endurance/gains when you take time off from workouts?

Ever suffered from FOMO?