Happy Friday! Three days of posting this week – a recent record for sure. But I’ve had more downtime thanks to learning my lesson last week about wearing myself out. I was home last night after work for awhile – enough time to write a blog post, watch an episode of Breaking Bad (STILL working on season 4), and catch up on my celeb gossip on E! News (my favorite mindless TV). But I’m getting ahead of myself – Five Things Friday hasn’t even begun yet. It will after Clare‘s charming graphic:

1. Everyone should listen to this amazing song and take its message to heart. EVEN if you’re not a fan of country music or the show Nashville. The song is about not throwing away all the beautiful gifts you have been given. Often I listen to it whenever I’m feeling tempted to restrict, base my self worth on my appearance, or just hate myself in general. In the worst of my eating disorder I was throwing away everything I’d been born with and all I’d worked for my whole life. This is the kind of song that can pull me out of a funk and make me re-evaluate what’s REALLY important in life.

2. My left shin has REALLY been bugging me. I’ll see how my new shoes (post to come on those next week!) help the situation but I don’t think I can shrug off the left shin pain I’ve been feeling during my runs any longer. Even though I haven’t done a “long run” in almost two weeks now, I still am feeling it both during and after my runs, no matter the distance. I’ve been running 3-4 days a week since I started training so I think that next week I’m going to do just 2 runs. Hopefully that, plus my new running sneakers, will send improvement my way. If not I will have to get serious about the left shin pain because I don’t want an  injury sidelining me from the half marathon, or fitness in general. 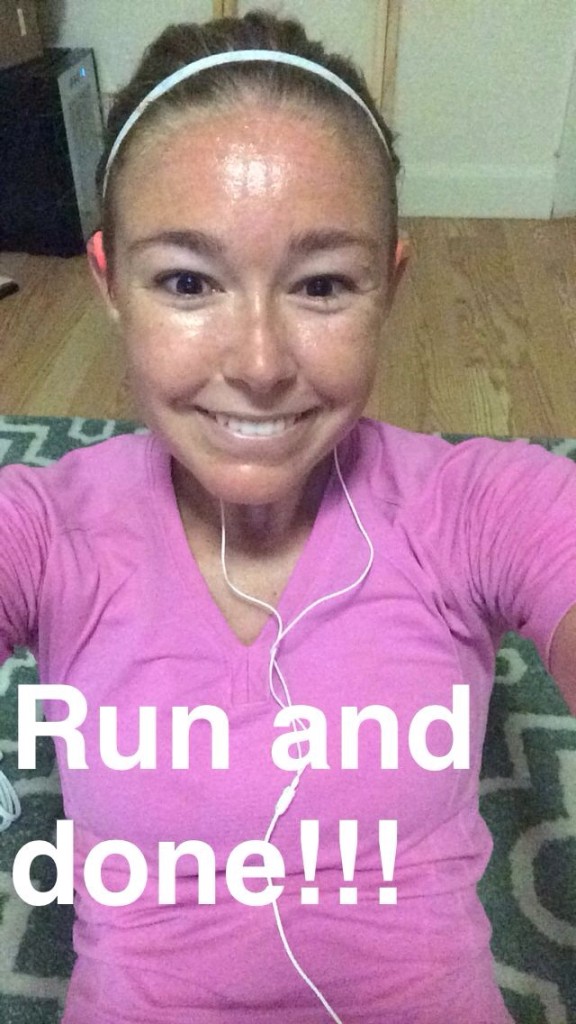 After this morning’s run – smiling through that shin pain.

3. It’s Kaitlin‘s bachelorette weekend! Since I couldn’t make it to her bridal shower I’m so very excited to celebrate her upcoming wedding (I can’t believe it’s only a little over a month away) here in Boston. We have some fun activities planned including a spin class tomorrow morning at Velo-City. Gotta sweat out those toxins my friends. As Brittany says, detox to re-tox!

4. Opening SnapChat when it’s in selfie mode is horrifying. I almost want to start getting into the habit of opening it while holding my phone straight out in front of me, instead of looking down at it. So that I don’t end up saying “HALLO 5 CHINS.”

5. I found myself Googling “how many calories in a bottle of Prosecco” last night. You know, just in case.

What are your plans for the weekend?

Have you ever had to deal with pain while running?

What song is inspiring you lately?