Man am I glad that I wrote Monday’s post in advance because the week has been so busy at/after work that there was no way I was going to have time to blog again until I wrote this post (which was actually last night). I had work-related events Monday and Wednesday night…and Tuesday’s planned night in turned into one drink which turned into trivia/dinner/multiple drinks. But hey I had a blast, and also did well at work this week, so I’m feeling OK about it all!

But I haven’t felt that OK lately about my workout routine. Ever since completing my first half marathon, I’ve felt a bit direction-less and unmotivated without a long-term goal. It’s almost like I am now goal-addicted! But I stand behind what I’ve said in the past…I am not about to go out and sign up for another half. Especially since I tried out my first run since the race this past Sunday – just a 3 miler – and it really messed up my IT band again. I couldn’t walk down stairs easily for a couple of days afterward. I think I need to take longer than a week off running – and focus more on IT band stretching and foam rolling – before I consider signing up for another half marathon. And if that ever happens, it certainly won’t be until after the winter is over, because I refuse to train in the cold!

It’s almost like without something I’m working toward, every workout doesn’t feel that worthwhile and is hard to get excited for. For example I went to the gym after work on Tuesday and did some solo-spinning, but I just didn’t want to be there. I felt like I was working toward nothing except burning off calories that I was going to consume later (sad but true). And I really had gotten to enjoy how my workouts during my half marathon training, even the non-running workouts, were working me toward something bigger than calories burned and my weight. Something about what I could achieve – a feat that didn’t have to do with my weight or appearance.

Enter the StairMaster – something I have always enjoyed for cross-training and a way to get in a super tough cardio workout in 30 minutes. But once I started training for the half, any time spent doing cardio outside of running was spent in group fitness classes since I missed them. No StairMaster (or StepMill or whatever you may call it) for me. Well I decided to head back to the StairMaster this past Wednesday morning before work, and I went for the same interval workout intensity I’d been doing before I started half training (see red arrow below). 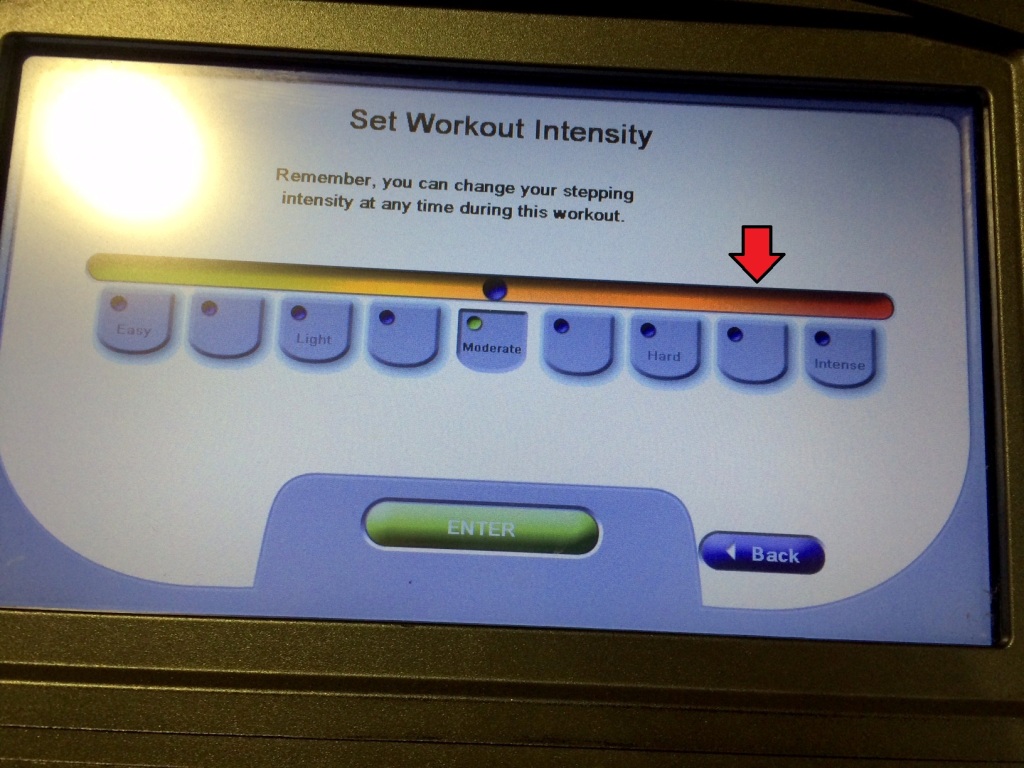 DAMN, that was hard. I no doubt improved my endurance during my training but I never did speed-work and I definitely have lost some high intensity cardio capabilities! I had to cut the level down one notch halfway through my 30-minute session, which at first made me feel shitty. But then I realized – this was a goal! A non-running related goal I could work toward that would perhaps motivate me and put more purpose in my workouts!

So my new fitness goal is as follows: work back up to being able to do that interval intensity level indicated by the red arrow above, for the full 30 minutes I usually do the stairs. And with good form…no handlebar leaning, no slouching!

I hope that working toward this goal will help me go back to being better about taking a true rest day each week, which I got quite consistent about when I was training for the half (I sound like I’ve said those words a zillion times in this post…sorry to sound like a broken record). But now since most of my workouts have felt to me like “not enough”, it’s been tough to allow myself to rest. This morning I just had to hit the gym for some upper body lifting, abs, and jump squats to finish off my workout. To me I was only working out for 30 minutes (see me saying “only”…argh) and barely doing any cardio during that time, so it doesn’t count as a workout. It was easier for me to count that as something before I finished the race but now that I have and I’m not working towards 13.1 miles on race day, it seems like there is no big goal to LET myself rest for! So maybe having this StairMaster goal will help me get back to being better about that.

OK, that’s my workout update for the day. Now it’s time to get Friday done with because my friend Leigh and I are off to a super fun event tonight with my beloved Gerard Bertrand wines (Yes even though I work for 90+ Cellars I am allowed to drink other wine…not that ours isn’t awesome too! Plus other peoples’ wine is our entire business.). The event takes place at the fabulous Fairmont Battery Wharf and is fittingly titled Wines on the Wharf. Also I know Gerard Bertrand is kinda old but am I the only one who finds him weirdly attractive?! (No he won’t be there tonight.)

Do you lose your workout motivation/satisfaction when you don’t have a fitness goal?

Does not having a fitness goal make it harder for you to take rest days?

What are you up to tonight? Any vino in the plans?