First of all, I want to say thanks so much for the supportive comments and tweets I received in response to Monday’s post. It felt great to write and even greater to get that kind of positive response and reassurance. While I work on trusting myself, encouragement from others really helps me along the way, so I appreciate everyone who took the time to send me well wishes – or even anyone who read!

I’m still trying to keep up with choosing a couple of recipes from my Pinterest boards each week to make for the weeknights I stay in. I usually follow them pretty closely, but the only ingredients in this recipe that I stuck with when I made this dish (on Sunday) were Brussels sprouts (duh) and hard-boiled eggs. I figured eggs went well with (turkey) bacon…and then bacon reminded me of BLT’s so I decided to throw in tomatoes. Plus I had some kale on hand, and I figured throwing that in there wouldn’t hurt! 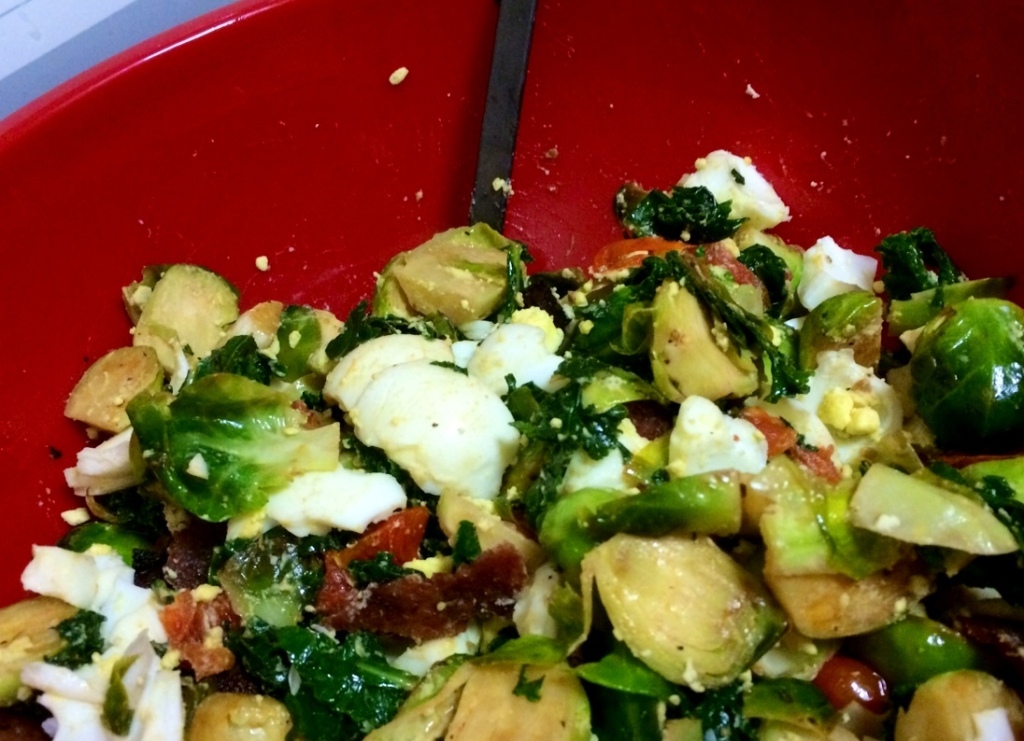 In the mixing bowl!

Don’t let the title of this easy recipe deceive you – there’s a few other ingredients in there! However the title ingredients were DEFINITELY the stars.

Though this recipe was supposed to last me two full dinners, it ended up being more like 1.5, and totally could have been one – it was THAT good! (But I still put that it serves two because not everyone’s stomach can handle as much fiber at once as mine 😛 ). I hope my fellow baby cabbage lovers enjoy this bowl of tastiness!

Have you ever made a Brussels sprouts recipe using eggs?

Do you ever plan for a recipe to last more meals than it ends up lasting?