I’ve done the whole using Five Things Friday to talk about my week thing before. But that’s OK as long as I give the post a different title, right? Today I’m breaking down my Monday through Friday – five things, five days!

Link up with Clare if you’re joining the Five Things Friday trend today!

I was so so so ready on Monday to stay in after my favorite spin class with Danielle Dee at the BSC. But work had other plans, and by the time I got to the gym (ten minutes late), all the bikes were full. It’s getting to be that time of year again! But there are a couple of bikes outside the classroom so I hopped on one of those for thirty minutes and pushed as hard as I could, followed by some abs and my latest round of PT exercises. Oh and another thing – I woke up Monday with a cold coming on. So by the time I got home post-gym – at almost 8PM – I was exhausted and SO glad I had meal prepped the day before!

I adapted a recipe from Vikalinka!

I woke up on this morning with extremely awful stomach pain. Do not eat three bowls of lentils right before going to bed, folks. It won’t result in pleasant feelings! Thankfully by the time work let out I felt better, but I had barely been able to eat anything all day aside a banana and chicken noodle soup. Still I took a spin class because it made me feel great afterward, and work has been so busy lately that I needed an outlet. I came home and ate plenty, because I finally felt 100%. I felt guilty about eating more than I usually do for dinner at first, but quickly reassured myself that I had barely eaten all day and had worked out, and I actually didn’t feel bad at all about it after that reassurance. It was nice to have the positive thoughts I’ve been practicing for so long actually work! 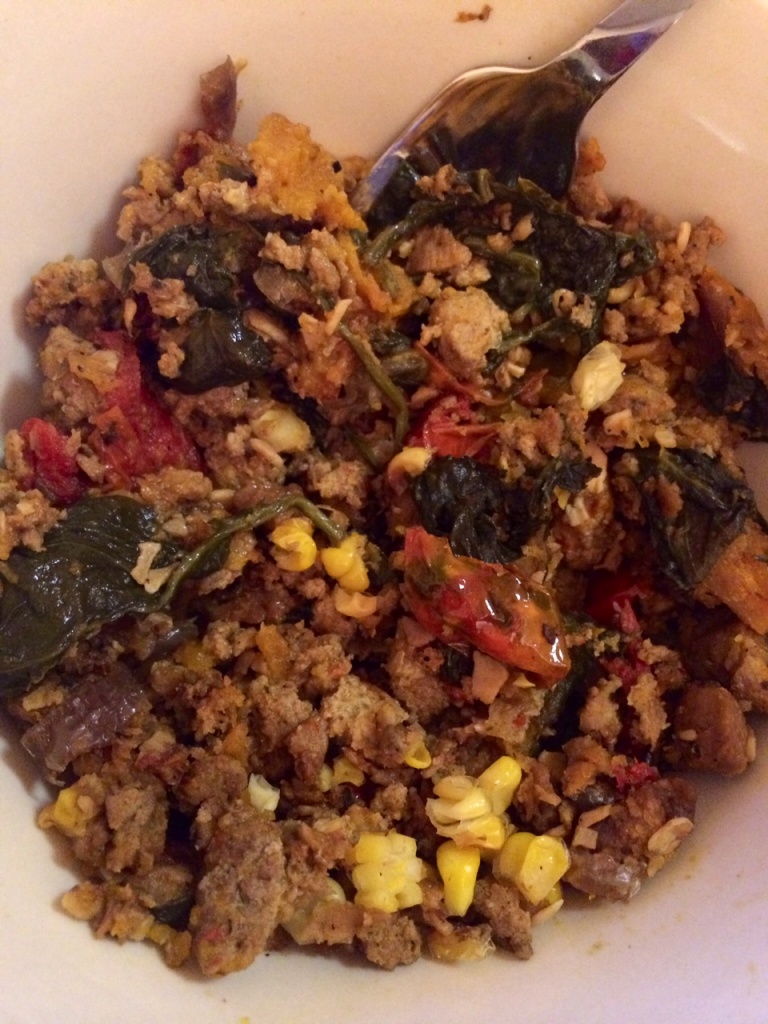 One of several things I ate for dinner – the paleo casserole that my mom adapted and sent frozen with my dad when he was recently in town!

After two nights in I woke up with only a small cough remaining – officially fought off the cold before it ever fully hit, using nothing but real food, activity, and plenty of sleep – and excited for a fun night ahead! I had plans to go to the gym between work and an evening out, but once again work got crazy busy and there was no way I’d have time for that, so I ended up taking a spontaneous rest day. 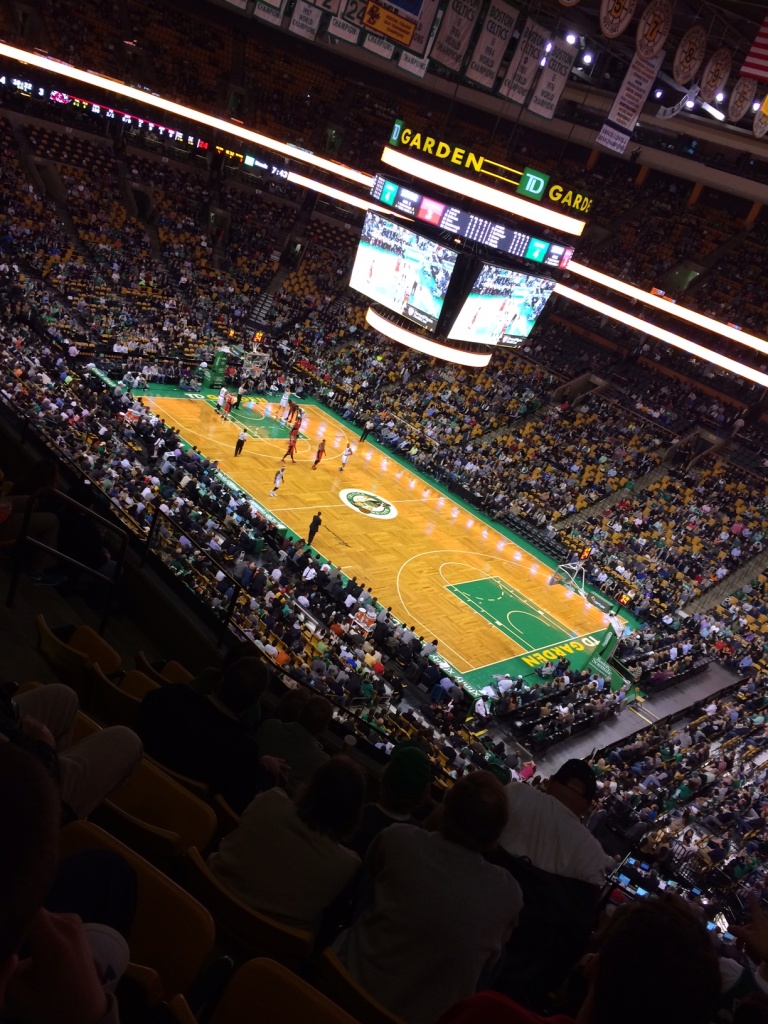 But I had such a fun night! Molly scored free Celtics tickets and invited me to join her for not only my first Celtics game, but my first ever NBA game! We grabbed a drink before and then headed to our seats, which were high up but still had a great view.

We enjoyed beers and fun food (I got a turkey wrap in an attempt to “be healthy”, and then was left so unsatisfied that I housed a tub of popcorn), cheered, and took way too many selfies.

Probably didn’t need to go to another bar after the game, but hey, when in Rome…or Boston, in this case.

I woke up yesterday morning feeling NOT so great at all. I didn’t have too much to drink but certainly didn’t need that last one…and probably could have had more water. So I didn’t feel very good about myself all day but I tried to keep it a normal day with my usual packed food, a trip to the gym after work, and a cozy night in. That definitely helped me feel better – as did the slice of pizza I had with dinner. There was a time when I’d NEVER have pizza twice in one week AND go out like I did on Wednesday, and also have the plans I have tonight (more on that later). That’s definitely saying something.

And it always helps my mood to rock new shoes at work!

I woke up not wanting to hit the gym, but knowing I’d feel better if I did, especially since I’d already taken Wednesday 100% off. So I did a mix of cardio and some weights, because lately I have definitely been slacking in the upper body lifting department! Then it was off to PT and on into work. Tonight is an event I’m VERY excited for – tonight I’m going to The Thing! Yes, the event is called The Thing, and yes, that makes it super fun to talk about. It’s a fabulous party that kicks off Thirst Boston (a week devoted to the cocktail and bar scene of this city) at one of my favorite hotels in Boston, the Fairmont Copley, and it’ll have the best bartenders in town mixing up tasty drinks…plus is an excuse for me to get dressed up! I’m even going to The Dry Bar in Chestnut Hill Square to get my hair done for this occasion (blog post on my experience will be forthcoming). I’ll be attending with Jeannie, Allie, and Emily and will be rocking a black sequin dress that I haven’t worn in awhile. To say I can’t wait is an understatement! 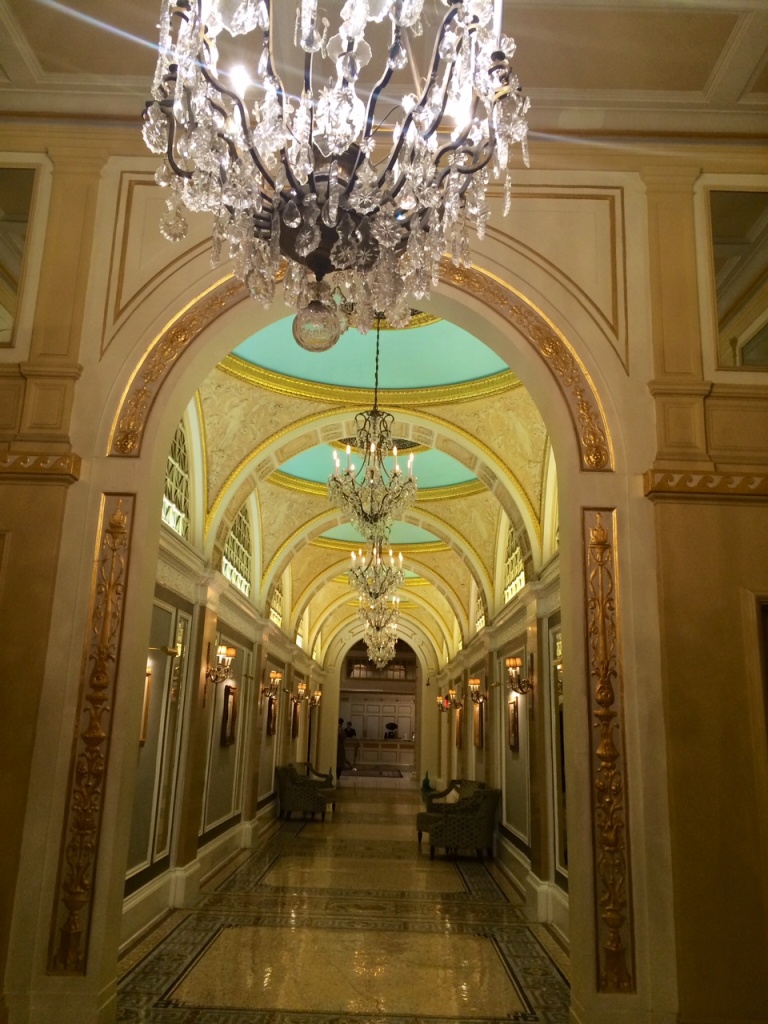 This is the Fairmont Copley. Yeah…I know.

So that was my week! Now tell me…

…what was the best part of your week so far? The worst?